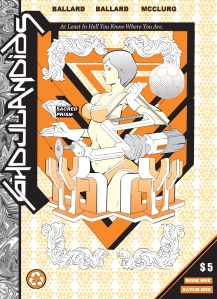 I’ve been so busy I almost forgot to mention that the first wave of Ghoulanoids madness is available for pre-order! This has been a blast to work on and it was nice to be in contact with the inimitable Ballard Bros. again. (You can read more about their work in a previous post.)

This is a short book, in stature and length, and as a book that deals with a multiverse or interdimensionality, a lot was worked out that got cut. That’s not a big problem in that we could turn this into a series if the demand calls for it. (About 400% of the ideas were snipped away to meet the demands of this book!)

This episode deals with Vel(lamo) Briar, mortuary owner, and what you could say is her call to adventure. If you guessed that that call involves some creatures called Ghoulanoids, then you would be most correct.

As I said on Twitter, some of the obvious inspiration for this came from movies like Phantasm and Critters. Unexpectedly, folks like Guido Crepax, James Joyce, Samuel Beckett, Joseph Campbell, and the movie Die Hard became touchstones for certain elements after the first few drafts.

For process nerds: Derek and I will be revising and editing up to the time the final artwork is sent in for production. I’ll need to cut and add here and there. Derek may have questions or concerns about cutting or adding elements. I’m writing and revising bits and pieces daily. I have one more major element to draft.

In other words, there’s never enough time. You have to do the best you can and eventually turn these things over to get them out there.

And it all started with Daniel’s toy sculpts. I’m not sure if the toys will have to be purchased separately or not. I’ve seen the new glow-in-the-dark ones and a few new designs. They are killer. And we have some special ideas for those as well…

Lately, I’ve been ending these things with current listening. I haven’t been doing any focused listening, but every now and then I’ve been listening to early Killing Joke and Budgie albums. While I’ve never heard a full album, I loved this Kate Bush doc. And I don’t care what anyone says, Glenn Danzig has written some great songs and has a killer book collection.