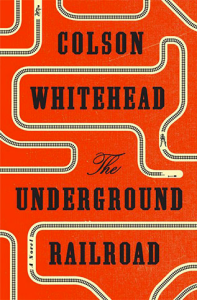 I liked this book, but I didn’t love it like most friends have. I’m not trying to be contrarian and say I’m above the hubbub it’s received. A few things go into this. One is that I genuinely like Whitehead’s writing. His philosophical zombie novel Zone One was a blast  and had me reaching for the dictionary on more than one occasion–in a zombie novel! Most readers I know were turned off by that vocabulary and voice. I enjoyed it and am looking forward to rereading that particular book. I’ve done so already in sections.

Another reason for my response is that I was expecting something stranger with his take on a slave narrative. I heard one review that mentioned a kind of magical realism and I was expecting something like a retelling of Huck’s adventures, but weirder and scarier. This is not the book’s failing, but my own. I had certain expectations based on a previous novel and a half-heard radio book review. I was talking to a friend and he said he, too, thought that it had a “sci-fi” element to it based on reviews.

My main complaint would be more that the book is in line with much of the fiction and nonfiction about slavery and race that I’ve read: Beloved, Uncle Tom’s Cabin, Frederick Douglass, Equiano, Pudd’nhead Wilson, etc. I don’t mean that these are all the same stories, or that there is a single slave narrative, but there are similarities. Most people I’ve talked to haven’t read many of these other titles. It was a particular area of interest of mine for a few years while I was studying the crossover of Gothic and horror elements in slave narratives.

Readers I know love the book, and like I said, I enjoyed it. I need to read it again without the expectations of magical realism being built into it–or at least more than an underground locomotive. That being said, there are some fantastic details and masterful touches. One of my favorites is that one of the major plantation owners owns a cane that sounds similar to Larry Talbot’s from The Wolf Man (1941), an emblem of classic horror interesting for many reasons. It “marks” Cora, the main character, and the duplicitous nature of the gentleman/slaveholder. Whitehead’s symbolic use of the “one-drop rule” is fantastic. He writes a mass shooting event that for any reader should be a clue about historical resonance, that we can learn reading backwards and forwards in time. Cora’s mother’s story is perfectly told as a fable, a mystery at the center of the book, that couldn’t be resolved in any other way than how Whitehead does here.