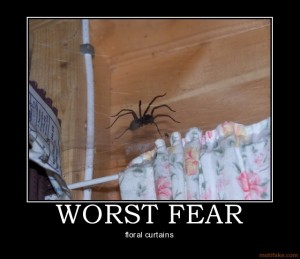 For part of our summer reading assignments, we are responding to a few of Poe’s short stories. After reading “The Black Cat,” I’ve asked students to respond with a story or a response about their own fears.

I wish I could say I had an interesting personal fear. I’m not talking about the fear of friends or family getting hurt or maimed or what have you, I think we all have those fears. I’m talking irrational personal fear. I would like to say that mine was something like “spaghetti” or “penguins” or “foosball.” For now, in light of “The Black Cat,” I’ll mention an irrational fear of animals, which for me comes down to two: giant roaches and snakes. The cockroach thing is so ridiculous (or maybe they scare me that much), I can’t even talk about it. So, I’m going to go straight to the snakes.

One reason why I say the snake thing is boring is that in a Judeo-Christian sense, the serpent has been the bad guy all along. Even before Genesis many serpents were killed and dragons fought. Even though I find this fear a little boring, I will say that I like going to the snake house in any zoo and have handled a variety of snakes. And as cute as that little green snake may be, if I ever have nightmares in which animals appear you can bet they are going to be snakes. One of my favorites involves a new apartment I had just moved into. In my dream I was sleeping on the floor. I woke up (in the dream) after something nudged my side. That something was a giant snake that was so large I never saw its tail or head. When I got up to get away from it I noticed that more were coming out of the heating and cooling vents. It was like a waterfall, a slithering mass of a waterfall. First one, two, three, and then snakes began pouring out of the vents above my head.

A second dream I remember comes from watching the Rikki-Tikki-Tavi cartoon too much as a kid. In this dream, I have pet mongooses that I unleash on a house full of snakes. This is one of those action-oriented dreams. I mean I throw my pet mongooses like baseballs at various large snakes while I try to stay away from them by running on beds, getting on bookshelves, etc. At one point in this dream, while my mongoose friends are battling, there is always that one snake that leaves the group and hurls itself at me. I put a hand up to keep it away but it bites me between my thumb and finger. Its venom is an acid that melts through my hand and the weight of the snake hanging on my flesh causes it to stretch like Silly Putty. I usually wake up around this point.

Most people say that their personal fear is public speaking. I’ll say snakes. And roaches. Those giant, flying roaches that will one day take over the world. So I’ve heard.