My three-year-old’s versions of Titanic (1997) are more enjoyable for me than the actual movie. Her versions are like the clips of Drunk History I’ve seen. Deep down I knew this wasn’t a movie made for me and there’s nothing wrong with that. Hence the twenty years it’s taken me to sit down and watch the thing. My kids really got into it, especially any dancing, kissing, running, or mixture of these. Though the three-year-old is also at the stage of asking a question every fifteen seconds, sometimes the same question for a solid five minutes, I do enjoy watching movies with them, which has also given me a love for computer animated movies that I have always avoided.

No matter how good some of those cartoons are, it was nice to watch a “real” movie (with some mild age-appropriate editing) with the kids. The other reason I watched Titanic was because it was the last film that I hadn’t seen on the American Film Institute (AFI) Top 100 films of cinema’s first 100 years. They have updated the list once, so I watched both. It’s not like completing the set haunted me. I’ve been down to Titanic alone for almost two years.

What I thought I would do, since I used both versions of the list, is a top twenty of my favorites, not necessarily what I think are the best, but films that I go back to regularly, several of which I have been watching for over three decades. Honestly, the list had very few films, if any, that I thought were total garbage, not even Titanic, though I have no plans for a revisit. Having never been a fan of Bill Paxton, and I’m sure I’ve missed some good performances, but he will always be Chet to me, I even got a little misty-eyed seeing his big ol’ mug. The real difficulty wasn’t finally getting through the film, but narrowing down my favorites from the list(s). 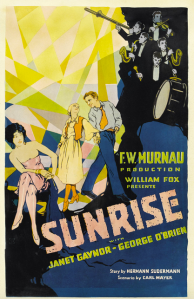 Sunrise: A Song of Two Humans (1927)
Murnau is more famous for Nosferatu (1922), but Sunrise has just as many visual delights. A love triangle story with hints of murder, and one that A Place in the Sun (1951) echoes, a film also on the list and worth watching. If you remove the frame story and stick with the melodrama among the lovers, Titanic isn’t all that different from Sunrise, either. But I love silent film and what Murnau conjures on screen and could watch this anytime. Nosferatu is one of the movies that made me love the medium. It’s hard to believe Murnau was dead by forty-two. 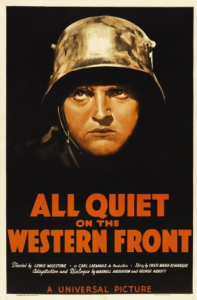 All Quiet on the Western Front (1930)
Just as Sunrise could be a modern melodrama, All Quiet feels like many a modern war film. Down to the last breath we will likely be telling stories of love and war. It’s not that I don’t like war movies, it’s just that I haven’t seen many or closely watched many for that matter. I tend to read about war. All Quiet does give a window into the nightmare of trench warfare in World War I, which make up some of the film’s greatest scenes. Barbed wire. Machine guns. Gas. Death.

City Lights (1931)
As a huge fan of the Clown Princes (The Other Three Stooges?) of Silent Cinema (Harold Lloyd, Buster Keaton, and Charlie Chaplin), it is impossible for me to really pick a favorite film by any one of them. Luckily, AFI makes it a little easier since Lloyd doesn’t appear at all (if memory serves) and Keaton appears once on only one version of the list for The General (1926). With the exception of giant monster movies, I tried not to repeat directors or genres as much as possible, but all of Chaplin’s films ranked by the AFI made it to my initial list, but I chose this beautiful romantic comedy worth multiple viewings.

Frankenstein (1931)
One of the rare instances where I am as much a fan of the source material and the film that butchers said source. I love this movie and this monster. Karloff makes the creature come alive in a way that’s scary and tragic. I guess that’s obvious considering how iconic this version of the creature is. We may have been lucky that Lugosi, famous after his role of Dracula, turned down the role of the Creature.

King Kong (1933)
I like stop-motion animation. I like monsters. I really like stop-motion animation monsters. I remember seeing this somewhere around kindergarten and I always felt sad pangs for the big guy at the end. The only update besides King Kong vs. Godzilla (1962) I’ve seen is the disaster of a 1976 remake. It felt like a disaster when I watched it as a child, and I haven’t revisited it and don’t remember it well at all. There are some rough spots in the film, but it gets the monsters right and if it was good enough for Harryhausen, it’s good enough for me. I wish I could get to the theater more, but it just isn’t always possible. In fact, the last non-documentary film I saw in the theater was Godzilla (2014). Maybe my return will be Godzilla vs. Kong (2020).

As always, if you’ve made it this far, thanks for reading! Tell me your favorites. I’ll post my next five soon.