I think I’ve garnered more rejections in the last year than I’ve ever received. The takeaway from that is that I’m submitting more than I used to.  Sometimes that makes the process seem easier and sometimes it doesn’t.

Lost Chords and Serenades Divine #2 is available for your perusal.

Boudu is a tramp, sometimes brute. He’s a little bit Monsieur Hulot and a little bit of Johnny, the misanthrope of Mike Leigh’s Naked (1993). I’m usually more engrossed by the performances of the co-stars who have to respond to the don’t-care-flair of the main character.

This was later remade as Down and Out in Beverly Hills (1986). 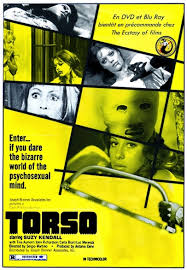 Torso (1973)
A giallo (Italian precursor to slasher films) that has all the elements you expect and a few surprises for those who love the genre. I’m wondering if these releases are now unedited. When I was growing up and watching a lot of horribly dubbed VHS tapes, there was never a lot of blood or nudity. This was partially why Argento’s films stood out. Maybe he had enough umph to get proper releases. Torso, also released as The Bodies Bear Traces of Carnal Violence (!), has been one of those films I heard about, but couldn’t ever find. It’s hilariously bad, and if you like this sort of thing, probably just plain hilarious, a pizza-and-beer movie.

Evidently there was a clothing shortage in Italy when it was made. A women’s clothing shortage I mean. Many seem to have had to rely on thin, transparent fabrics or scarves in which to wrap themselves. There are several times during the day, sometimes sort of sunbathing, where women just forgo clothes altogether.

The film has the typical psychosexual motivation for the killer that gets revealed in a bit of sweaty exposition. There are tires squealing…on grass. There is a fight scene featuring actors trained at the Shatner Stage Combat Academy complete with sound effects from low budget martial arts movies.

Spoiler: Like you care! Ha! In traditional genre terms, you could count this a comedy! Whatta hoot!

Despite my love for cinematic atrocities like Torso, my two most-frequently watched directors last year were Shirley Clarke and Maya Deren, both fantastic artists and most often described as experimental or surrealist directors. Art film, basically. (Check out Shana Moulton if you like this kind of stuff!)

Bill Morrison is a new director to me, though he’s been working for at least two decades. He’s done a lot of collaborations with some of my favorite musicians. What I’ve seen of his work fits the experimental/art film side of things, though much of it also seems to be about restoration. He frequently reinterprets pieces of lost films and gives them a kind of retelling using a variety of what appear to be chemical effects. I did not expect to like this as much as I did.

Discovering Morrison’s work is as exciting as when I discovered Guy Maddin’s, or any of the filmmakers listed above. They create distinct, strange worlds.