The Week That Was, or Jackasserie

The post below is originally from Friday, February 23. As we were settling down for the night, we heard running, then rushing water. Within minutes water was pouring out of the ceiling and flooding over my shoes. Parts of the ceiling fell in. No one was physically hurt, but we had to move to a new apartment and the kids will be waiting for another month before we have all of their clothes and toys in order to know if they are too damaged from the water. We were in a hotel for about two weeks. We’re slowly getting life back together.

I’ve had to abandon several writing projects that I hope to resume as soon as I can. Until then, this may be the last update for a while.

I have to give thanks to family, friends, students, and colleagues who have been patient and helped support us through this. Thank you!

Also, a big thanks to Elton Ripley, who has been incredibly helpful. We couldn’t have gotten through this process without him.

Here’s what I was writing a few Fridays ago:

Shorter work weeks feel more difficult than a normal week. It’s like everyone still crams in the same amount of work and expectations over fewer days.

And that’s been most of the week, really. Lots of work and essay grading, which will likely continue for at least a month before reviews start kicking in.

My AP students did an exercise writing descriptive paragraphs that used polysyndeton in one version and asyndeton in another. Then they analyzed how the devices altered the tone and tempo of their writing. Though descriptive writing can be blended into any writing mode, it sure felt like a break reading these in between the various analytical papers we generally write. It’s nice to see a different side of their personality come out in their writing.

I did a random line doodle that turned into a portrait of a donkey. Balthazar? I was once told I was like the Eeyore of faculty meetings. I’m trying! 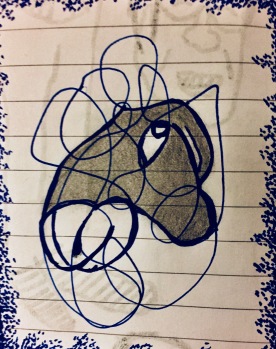 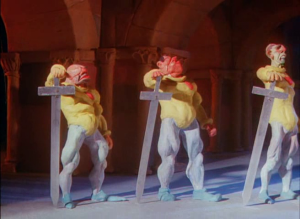 I love stop-motion animation and I had never heard of this one before it turned up on FilmStruck. It’s short, but fun–and extremely violent. I mean it’s like California Raisin gore, but still. It retells the Bluebeard folktale of a powerful, ugly nobleman whose wives have a habit of disappearing. He warns a new wife that she can go anywhere and enjoy any treasure, but to stay away from a chamber in the bottom of the castle.

While not the smoothest animation, Bluebeard has some interesting design concepts and sometimes an interesting use of materials, for example, the cottony fabric used for dust coming off of the roads.

And the quality in some spots is breathtaking, though you can tell that the film stock or stocks that the restoration was done from were damaged. It’s part of a Criterion Collection of Jean Painlevé’s, Science Is Fiction, which features some outstanding short films on underwater subjects like the octopus and sea horse.

Categories: life Movies The Week That Was Writing