Remember last week and all that great weather and trips to the park? This week began in rain (and ended in rain) and a broken foot for our youngest who was just getting the hang of sliding down the “fire pole” by herself. She’s in a cast and a Franken-boot since it’s more dangerous for little ones to have crutches. I assume more dangerous to herself, but I have a feeling if she had crutches, we would be treating her older sister for a concussion or worse. We know she’s been in pain and sometimes it catches up to her, but overall she’s been so good about everything, despite what I titled this entry.

It’s quite difficult to work with and respond to canonical texts without having the older work overtake the new one. Brown shows masterful control here. Where there are resonances with the Bible, the language never takes control of Brown’s own. He’s writing contemporary poetry rich in its own melody, yet rich in historical overtones.

I’m taking a break from the grind of the submission process, and to some degree a break from poetry writing itself. I’ve naturally fallen into nonfiction–it’s what I started writing back in sixth grade. And music is now taking up some of that time I used for writing and submitting. One of the benefits of this break is taking the time to read many of the contemporary poets I’ve been wanting to read. Brown’s name has come up a lot recently.

I think this may have been the first time I watched Man with a Movie Camera (1929) as a whole. Anyone with an interest in film or film theory has likely seen images from it (like the Odessa steps sequence of Eisenstein). This is a fantastic film built on a montage of daily life and the creation of film itself. The “man” of the title is often filmed by another man with a camera. I watched this in relation to Peeping Tom (1960), another self-reflexive film that I’m writing about for my next Test Prep essay. 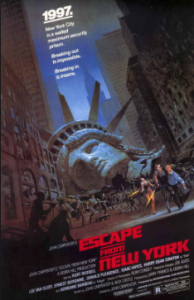 One of my favorite movies is Carpenter’s The Thing (1982), so it’s strange that I somehow missed Escape from New York (1981). Overall, it’s a well-done popcorn movie. I liked the images of the city, blacked-out, skyscrapers green and hulking and empty. I also liked the palette for many of the night scenes: high contrast red and greens or cool blues (and grays and tans? if I remember correctly) played against the darkness (and Carpenter’s score).

Anyway, I’ve never noticed Carpenter use so many focus pulls.

Frank Doubleday’s creepy, oddball performance as “Romero” just about steals the whole movie, which is saying a lot for a film rife with scene stealers.

This week I’ve been listening to Alban Berg’s Piano Sonata, Op. 1. It was his first published composition, but his only sonata. Berg wrote this as a student of Schoenberg, who developed the most lasting version of twelve-tone composition we have. I love the coloring of these chords and how within this context dissonance and consonance–or rather a traditional notion of these ideas–gets altered. I’m going to listen and pick through the score some, just to gain some understanding of what’s going on, though for the moment, staring at something like this: 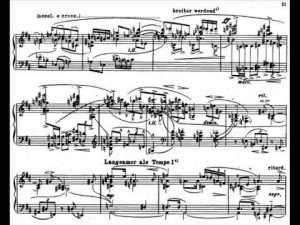 seems way beyond my comprehension at the moment.

Anyway, I’ve mostly listened to Pierre-Laurent Aimard’s recording of it, but I plan on listening through some other performances to hear how different players approach a work like this. Glenn Gould has also recorded it, so I’m interested to see how his compares to others. I really hated his Bach recordings for years, but they’ve grown on me.

I’ve been working on the first Bach cello suite and had an insight that I’m almost embarrassed to admit. Maybe I will when I have the piece under my fingers again.

For sightreading practice I’m playing some of Haydn’s E Flat string quartet (No. 31) and playing the cello part on electric bass.

And for workouts this week I’ve been revisiting: 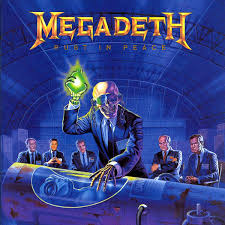 Metallica’s music never made me interested in playing guitar, but Megadeth, especially Rust in Peace, inspired me to try more guitar playing. Great riffs and solos. A friend’s dad once described Mustaine’s vocals as like “a little, green head yellin’ at me.” Sure, some of that’s cringy–but Mustaine takes on characters at times, which was kind of a risk in thrash. I forgot how funny some of the lyrics were (“Immense in my girth, erect I stand tall” –C-mon, it’s about a missile!–“Launch the Polaris! The end doesn’t scare us!”). I remember enjoying the references to Roswell and general dystopian theme of this record.

I’m also trying to redevelop the walking bass chops I once had. I’ve also discovered some Paul Chambers isolated bass tracks, which I’m excited to learn from as well.

If I can ever get these essays graded.

I like red peppers and Jan Švankmajer movies. 1. Current Listening: Lots of soul from Muscle Shoals 2. Current Viewing: A Hard Day's Night (1964). 3. Current Reading: H.G. Wells: In the Days of the Comet View all posts by Stephen McClurg