While finishing the last week of the 2018 academic year, the family got some form of stomach virus that started last week. Since that cleared up, we’ve been able to do some much needed cleaning and organizing. We’re also planning our next academic year.

The youngest got her cast cut off and she is healing. The worst part of the ordeal (besides the smell–she dutifully peed into her cast the first night she had it) was the sore she gave herself by packing mulch into her cast. She hasn’t explained why she put the mulch in the cast, and sometimes there is no real answer. Maybe because it was there.

Tonight we were discussing different astrological systems at dinner and finding out which of us are dogs, snakes, sharks, dragons, etc. When told we were water bearers, the kids began chanting:

The Phantom (1931) is a giant, wonderful mess of an attempt at a horror-comedy/action film. I tend to adore this kind of z-grade schlock and I want to like this one less than I do. I can’t say anything is done well here, but I still had fun. The plot revolves around a character called “The Phantom” who escapes from jail and promises more dastardly deeds. Sure. The plot is more confusing than the poster, which I think has a lovely balance to it–unlike the film.

The movie could partially be saved with a good edit. Scenes start early or end too late rendering the performances–not stellar to begin with–almost surreal. Every emotion becomes awkward humor or just awkward.

Still, I found it oddly charming.

Lilli Carré is one of my favorite comics writers and artists. Her stories, sometimes dark, sometimes absurd, sometimes neither, may remind one of O. Henry, Aimee Bender, Flannery O’Connor, Mark Beyer, or Edward Gorey.  And whether or not these folks were actual influences, Carré is a unique and inspiring voice. I’m often terrible about keeping up with comics and the comics creators I like–I just discovered that she’s done some animated films that I’m excited to track down. 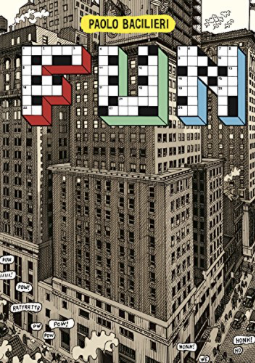 Paolo Bacilieri’s FUN: Spies, Puzzle Solvers, and a Century of Crosswords is a graphic novel that tells the history of the crossword. But it’s not that simple or straightforward. The crossword history is told as a work in progress by a writer named Pippo Quester, who I think is an homage to Umberto Ecco.

The art is fantastic, and the way the art and story inform and extend each other gives the story immediate and multiple pleasures. The book holds up on multiple reads. I was shocked at how many negative reviews this one got on Goodreads. Many of the complaints were that it should be at least two different books. I totally disagree. Quester is the vertical plane of the crossword. He is known for his intelligence. This book is also partially about his fall. Zeno Porno (a Disney cartoonist!) is the horizontal. He’s down-to-earth, moving through life, trying to figure out his life. I keep thinking of Mafalda as the face staring out of the first crossword in The Settimana Enigmistica. She is an enigma in the book. There’s also a way where I read the three characters as representations of three different generations.

I loved this book. 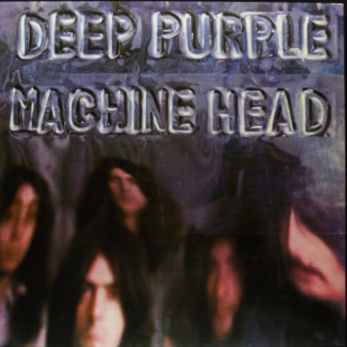 My workouts tend to be scored by either Public Enemy and older Ice Cube records or Slayer, Entombed, or other metal variations. I was scrolling through music the other day before cardio and I saw this and figured I’d give it a shot. The only thing I knew (or thought I knew) about the record was that it must not be that good because we always had 10 to 20 copies in the used bin of the record store I worked at for several years. The album art, well, just kinda sucks and I figured the rest of the thing must suck, too.

We all have our blindspots.

I didn’t recognize the opener, “Highway Star,” at first because I don’t think I’ve ever heard the actual song. I’ve heard covers, clips, and a radio edit. It’s a fantastic rock song. I found it funny that it’s a hyperbolic “girls and cars” song like a lot of the early material by the Beach Boys. I found a German TV appearance that has some great solos and a hilariously drunk or forgetful Ian Gillan. Maybe he’s improvising, but if so, it’s not very inspired.

This record also has “Smoke on the Water,” a tune off limits when I was growing up and playing music. It immediately signaled you were uncool and a beginner. I’ve never heard this song played or phrased correctly. I realized this when I finally listened to the actual song and not someone trying to play the riff. Also, the song namechecks, of all things, Frank Zappa and the Mothers of Invention. What?! I had to stop and rewind the song and  then realized it was about the Montreux fire. It was the last thing I expected in such a ubiquitous song.

Much of the record is a kind of blues rock that’s fine for what it is. I love the organ riffs and solos. There are some fun lyrics like “Maybe I’m a Leo, but I ain’t a lion.” I really like “Pictures of Home,” which is a type of ubi sunt, or “Where are they?” poem.

Back to that cover: I will say that I thought the album was contemporary in the ’90s, so maybe that’s saying something. I assumed it was a compilation or best-of thing. But still, that cover’s so bad. Did it look trippy in ’72 or something? I don’t get it. I just imagine the doors closing on the worst elevator ride ever.

2 thoughts on “The Week That Was, or Emptiness, Eagles, and Snow”